skip to main | skip to sidebar

I almost didnt post an entry for RCI Bengal but a stray comment in Sandeepa's blog about cooking chitol mithas for Saturday lunch led to her asking me to put in an entry The chitol is a large freshwater fish with a very soft , oily delicious stomach , which is called "peti"or the area around the stomach and a fleshy back ringed with bones called the "gaada" in Bengali . out of which the muithas are made .

The oilier the chitol peti is ,the more delicious it is, and cooked in a light coriander -cumin paste curry with a tempering of cumin seeds and bay leaf and boris (lentil puffs fried to a crisp before being immersed in the gravy) , is to die for 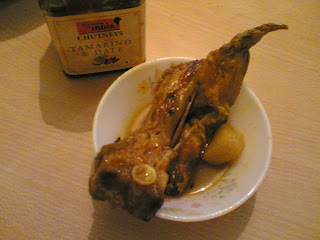 The muithas are a little complicated but the result is so absolutely delicious that the effort is well worth it .The flesh on the back is between two layers of bones so make sure you tell the fish seller to splice it down the middle so that the scraping is simpler . I normally use a teaspoon to scrape the thick flesh off . 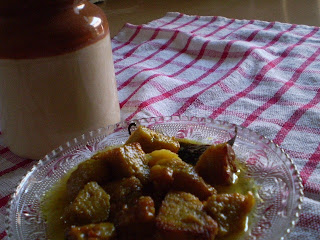 Scrape the flesh off the fish back . Mix the scraped fish with the potatoes and add the mined onions and salt to taste . Form into large roundels .Meanwhile heat a pot with a litre of water and let it boil . Immerse the roundels in the boiling water . I sometimes add a little ginger garlic paste and salt . Boil for at least 10 minutes or so till a knife inserted in the roundels comes out clean .Slice the roundels through when cool and dice them , Fry to a light brown .

To make the gravy

Heat mustard oil in a wok ( any other oil if you are queasy about mustard oil) . Temper with the bay leaf and cinnamon. Add the pastes and spices and fry till cooked . Add the potatoes and cook till soft . Add 2 cups of water . When it comes to the boil, add the fried muithas . Add salt /sugar to taste .Serve with steamed rice.

And while I do grumble when AG toddles in on Sunday morning with a whopping lot of chitol gaada for muithas the glee in Tani's eyes when she sees her favourite muithas for lunch is reward enough !

Ooooof ! Kato din parey chhabitao dekhlaam. Delhi te Chital maachh paoa to jaay, but with hubby posted elsewhere now, looks like too much of an effort for me to go 25km down and pick up these delicacies. Great efforts and congratulations on your enthusiasm

such a joy to see these... anek din muthe khaye nei... I am still trying to locate a store for indian fish...